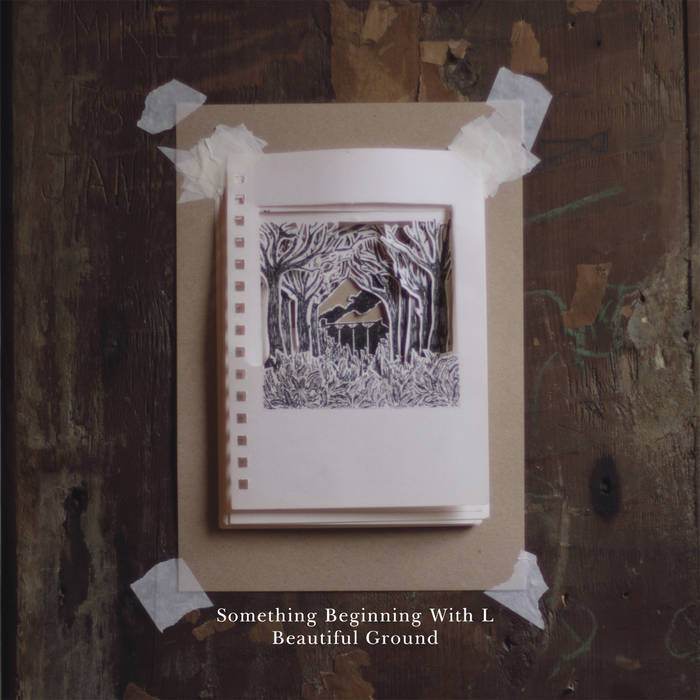 "Beautiful Ground is awash with atmosphere, 4/5" Time Out

" an understated pearl of a debut 7/10" Drowned in Sound

"There's something brilliant to pick out of any and every song on this album. It's possibly the most consistently thrilling debut of the year" Americana UK

"Their self-produced debut album is a stellar and ethereal earful. Something Beginning with L are on to a winner with Beautiful Ground" The Line Of Best Fit

"'Something Beginning With L – Elephant Pt. II': we're transfixed by this surreal slice of woozy-whimsy off the shoegaze trio's debut album 'Beautiful Ground' (out July 18, Armellodie Records)." Time Out

"The vocal harmonies are flawless, the band sound is cleverly balanced between the post Cobain guitar dynamics and the choral styling of the records softer moments...Stunning, really, few bands set their sights this high nowadays and fewer yet make it work" Tasty Fanzine

""Beautiful Ground" is a beautiful album...nothing is cliched here. It's heartfelt, it's real and it packs a not-so-subtle punch. There's a punky feel to the album with the vocals sounding sweet on the surface but there's an unsettling feeling that all is not what it seems, subtly retaining an edge to the songs." Unplug The Jukebox

"Beautiful Ground is swimming in the kind of absorbing melancholy that can make this kind of stripped-down pop so endearing and enjoyable." 8/10 Subba-Cultcha

Something Beginning With L are a bewitching trio made up of Lucy Parnell (Vocals, Guitar), Jen Macro (Vocals, Guitar) and Jon Clayton (Bass, Keys). The band juxtaposes scuzzy electric guitars and buzzing synthesizers with acoustic fragility and electro-beats, guided into the light by the salient crystalline vocals of Lucy Parnell and Jen Macro who offer bliss-out close harmonies, melancholy and absorbing into the band’s encapsulating dream-pop.

Opening with the zoned-out burr of ‘Poster Croc’, delicate, restrained and alluring, the scene is set for Beautiful Ground, a quiet treasure of a long-player. Recorded in Jon’s own One Cat Studios - an old converted paper mill in Brixton – and produced by the band themselves, Something Beginning With L nurtured the songs through many guises and transformations, experimenting with the natural reverbs on offer within the hidden nooks and crannies of the old building.

“The songs seemed to evolve and change from week to week as we found our feet as a trio and experimented with Jon’s toys. It was a bit of a journey, sometimes we were stuck in traffic on the M1, but mostly it was like a road trip across America” says Jen, and it’s a trip you’ll want to take again and again.

With the uncomplicated pop proficiency of ‘Last Night's Party’, a hopeless love song based on a wonderfully romantic connection - “loose-limbed in the back of a taxi, something in his heartache attracts me” sings Macro – but alas it cannot last, as both protagonists are pretending to be someone they are not in order to win each other’s affections, and ultimately, they know it. The sweet synthesizers and playful rhythm do little to soften the sadness-tinged admission that the song bows out on, “this person is not the person that I wanted you to leave with, she’s a liar, she only said those things to catch you, and now she’s gone.”

That feeling of unease - especially in one’s own skin - spills over into ‘Hobby’, with Macro confessing, “I need some hope to replace this crippling fear, are you going to deny me or are you going to give in?”. It shows remarkable vulnerability and highlights the bands talent for arranging and tastefully layering instrumentation, to transport the listener from a simple picked lullaby to a widescreen, shoegaze marathon.

It’s not all sweetness and light however with ‘Sound’ acting as a bit of a hate crusade, borrowing from the famous line by Lauren Bacall in the classic 1944 film, To Have and Have Not – “you know how to whistle don't you Steve? You just put your lips together and...blow” – but instead of whistling for a booty call, Macro is pleading for an individual to suck it up.

‘Sound’ is also the first of three tracks on Beautiful Ground to be augmented by the titanic talents of sticks-man, Rob Ellis (PJ Harvey, Anna Calvi) who also provides the backbone for ‘Say’ – a song of desire, angular but not clichéd, disenfranchised but not sloppy, apathetic but still fierce – and ‘Mean’, which layers up adventurously, and culminates with Ellis dominating the tank-rumbling outro like an eight-armed, stick-wielding ogre, dead-set on causing a bowel-shaking earthquake.

Elsewhere ‘Elephant pt ii’ is a gorgeous slice of surreal melancholy - “me and my sisters at the edge of the world with our toes in blue” sings Lucy – leaving the listener in a trance-like state.

“Around 1994 my parents saved and saved and took my sisters and I to a beautiful beach in France, it could have been on the isle de ray but I can't be sure. As we arrived we parked our small red plimsoles and newly obtained, not quite fashionable hi-tech neon hi topped shoes on the sand, and we played all day in the water. But when the time came to put on our shoes and go home we discovered our shoes had been stolen by the tidal water. We will keep an eye out for our lost shoes forevermore. My uncle Roger and auntie Denise definitely kept an elephant next door.” Lucy Parnell.

The latter stages of Beautiful Ground find the band at their most transfixing with the exquisite guitar work and effects on ‘One Knee Two Knee’ nothing short of sublime - listen close and you can hear a ticking clock in amongst the swirl of sonic jollies - all glued together by those irresistibly louche female vocals.

The intricate layering and perfectly structured quiet-loud-quiet sound the band possess are instilled in ‘Overcoat’, a song that manages to balance lyrical fragility with raucous musicianship, the choppy rhythms and squelch-blips providing a foundation for Lucy and Jen’s stunning close harmonies to rally, “I’m sat in this overcoat feeling very small, hope that I grow into it before I wear it out”, they sing as the song swells into a blissful cinematic crescendo.

“Overcoat is about a coat I got from my Nanna. She died on Christmas day when I was 7, and all her presents to us were still under the tree. Mine was this burgundy and cream puffy jacket thingy. I cherished that coat, it was a bit too big but I wore it everywhere, and hoped that I’d grow into before it fell apart. So I guess it’s metaphorical as well, about becoming who I’m supposed to be before I… y’know… die ” Jen Macro.

Not a troupe that could be accused of lethargy by any stretch of the imagination, Lucy, Jon and Jen are a diligent bunch of comrades, having all earned their stripes as part of South London noiseniks Stuffy/the Fuses, Lucy and Jen can currently be found flaunting their considerable talents in Graham Coxon’s Power Ensemble, the band that recorded the Blur guitarist’s most recent solo offering, The Spinning Top, and that continue to tour throughout 2011. The pair have also lent their sweet tones in support of ex-Soft Boys front-man and esteemed solo artist Robyn Hitchcock, what’s more, Jon and Jen both performed in former Ash guitarist, Charlotte Hatherley’s touring band, and you thought you were busy…

The album draws to a close with ‘Unwittingly Beautiful’, the only song present to have featured on the band’s recently released Listed Building EP, dense and carefully constructed, the chords chime and shimmer with enduring resonance, allied to Jon’s pulsing bass line and intricate electronic percussion, abstract and eerie as a love song can be and all the more life-affirming for it.

Finishing on the largely improvised ‘73’ playing out like a dying ember with its trippy, zoned-out sounds reminiscent of those that opened the record capturing the essence of Something Beginning With L. As sweet as honey yet ominous and spooky. A pretty, spine-tingling mess; a quietly, shining treasure, ladies and gentlemen, Beautiful Ground.

All songs written and produced by Clayton/Macro/Parnell. All sounds made by Something Beginning With L, except for live drums. Special thanks to Stephen Gilchrist, Terry Swain, Rob Ellis, Nick Rice and Chopper for their drumming expertise.
Recorded and mixed by Jonathan Clayton at One Cat Studio, Brixton www.onecatstudio.co.uk.